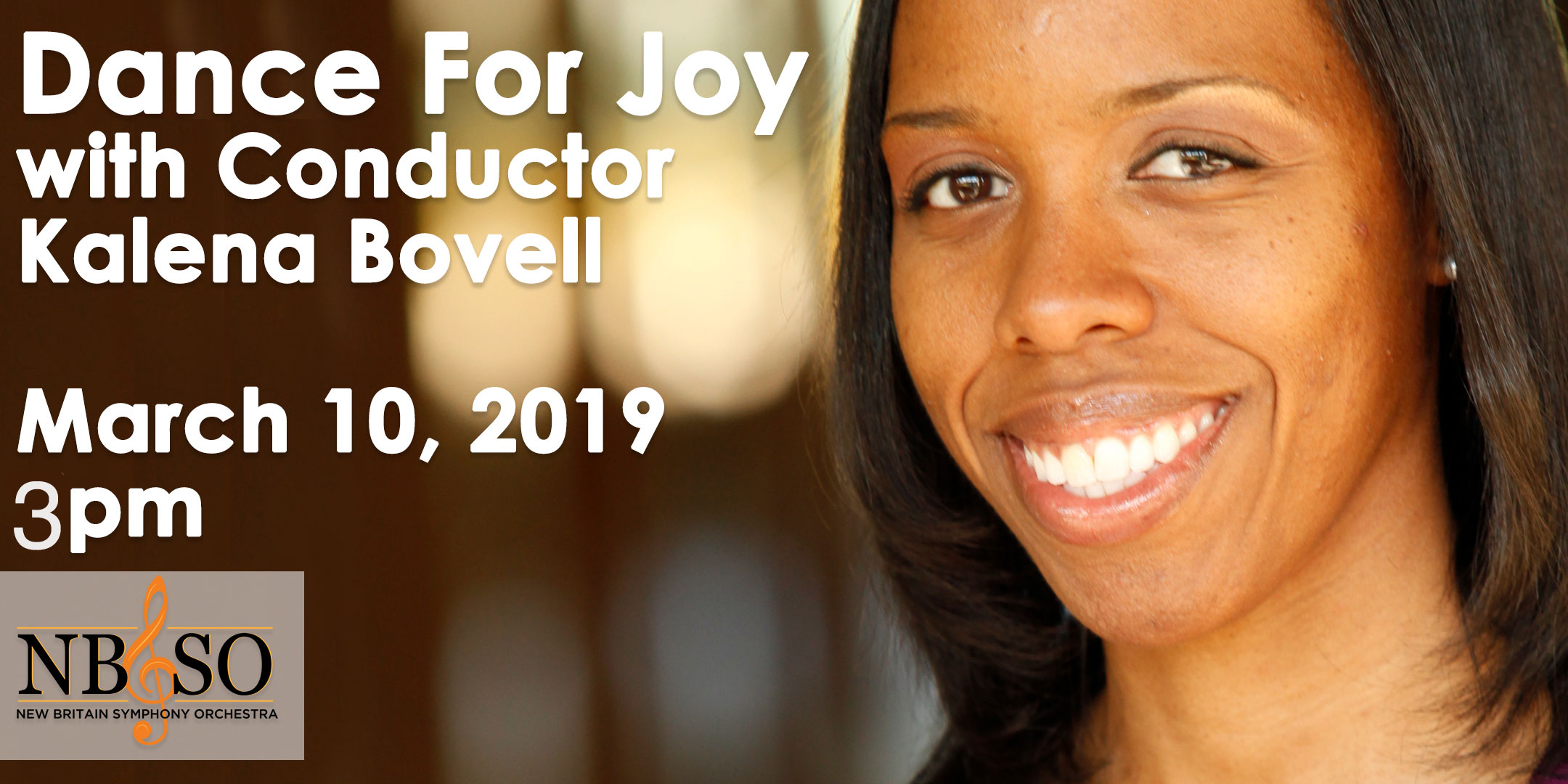 On March 10, the NBSO will present a concert that will delight both the eyes and ears: Dance for Joy, under the baton of guest conductor Kalena Bovell  with guest violinist Clara Kim, and performances by dancers from both the CCSU Dance Company, and the END Ensemble. The program will include well known dance related works from the world of opera, ballet, and orchestral music:

Glinka’s Ruslan and Lyudmila Overture, written between 1837 and 1843, is based on a poem by Alexander Pushkin and is a mainstay of the Bolshoi Theatre, having been staged more than 900 times. The overture, which is often described as rollicking and exuberant, is one of the best- known orchestral showpieces in Russian music. Wikipedia also describes it as “known for being a nightmare for bassists.”

Dvořák’s Slavonic Dance op. 46 No. 2 (1878), originally written as a piece for piano four hands, is a “dumka” or pensive and thoughtful piece, although it also bursts with enthusiasm and energy. Choreographer Erica Nelson has created a dance piece for her END troupe which will be performed onstage during the work.

Max Bruch’s Violin Concerto in G minor, written in 1866, is one of the most popular violin concertos in the orchestral repertoire. Guest violinist Clara Kim [ link to https://www.clarakim.info/] is an internationally renowned, award winning performer who holds a doctorate from USC and is currently an Artist Diplomate candidate at the Juilliard School of Music.

Gounod’s “Faust” Ballet Music is comprised of 7 short dance pieces added to Gounod’s original opera for a performance at the Paris Opera in 1869. The music became so popular that George Balanchine created Walpurgis Nacht as an independent work based on the opera’s joyful ballet music.

Manual De Falla’s La vida breve, Spanish Dance No. 1, written in 1905 but not performed until 1913, is arguably one of the best -known works in the Spanish music repertoire. Choreographer Felipe Puletini [ link to https://www.felipepuletini.com] and members of the CCSU Dance Company will perform onstage to the folk music inspired piece, which is also frequently played by two guitars.

Rimsky-Korsakov’s Capriccio Espagnol, op. 34 was originally a piece for solo violin, and is a five -part work, played continuously, which begins with a depiction of dawn and ends with a rousing fandango. After its first performance in 1887, the composer dedicated the piece to the orchestra in gratitude for their enthusiasm for the work.

Praised for her “brilliant conducting skills” (Chicago Tribune) Kalena Bovell was named Music Director of the Civic Orchestra of New Haven and will begin her tenure for the 2018 – 2019 season.

Described as a conductor who possesses innate confidence and charisma, Kalena has held conducting fellowships with the Allentown Symphony and the Chicago Sinfonietta. As a fellow with Sinfonietta, she worked closely with Mei-Ann Chen and was part of Maestro Paul Freeman’s vision of fostering and promoting cultural diversity within classical music. Because of her success in the program, Kalena was made assistant conductor for the 2016 – 2017 season and made her professional debut with them as part of the MLK Tribute concerts in Chicago’s Symphony Center. Also, that year Kalena was a Semi Finalist for Marin Alsop’s prestigious Taki Concordia Fellowship. In 2015 she was awarded 3rd place in the American Prize for the college/university division.

Adventure and collaboration are at the heart of violinist Clara Kim’s multi-faceted career as new music performer, chamber musician, and educator.

By commissioning, premiering, and championing works from living composers, Clara has quickly established herself at the forefront of her generation in the interpretation of contemporary music.  She has had the honor of working with some of today’s most celebrated and imaginative musical voices such as Chris Theofanidis, Martin Bresnick, Augusta Read Thomas, Grammy Award-winning Stephen Hartke, Kaija Saariaho, Jacob TV, and the Sleeping Giant Collective.

Clara’s passion for new music has led to performances at Columbia’s Miller Theatre, Albany’s American Music Festival, Amsterdam’s Concertgebouw, and Princeton Sound Kitchen, as well as at Carnegie’s Zankel Hall as part of the Kronos and American Soundscapes workshops.  She is the first prize winner of the 2012 International Solo Violin Competition in Cremona, Italy.

Dedicated to collaboration at the highest artistic level, Clara’s largest project to date is the Argus Quartet, a string quartet committed to connecting with audiences through both traditional and new music. Argus is the first prize winner of the MPrize Chamber Arts Competition and the Concert Artists Guild Victor Elmaleh Competition, and has been in residence at the Caramoor Center for Music and the Arts, James Madison University’s Contemporary Music Festival, and Yale University.  Currently, the quartet serves as the Graduate Resident String Quartet at The Juilliard School in New York City.

With this adventurous and versatile ensemble, Clara has performed at top venues such as Carnegie Hall, Muziekgebouw aan ‘t Ij, Roulette, Bang on a Can at Noguchi Museum, the Shalin Liu Performance Center at Rockport Music, and Music Academy of the West.  Argus has received a Chamber Music Commissioning Grant and a Tarisio Trust Young Artists Grant in support of their commissioning and recording projects.

Clara also dedicates much of her energy to community engagement work and education. She has taught at a number of leading academic institutions, including the University of Southern California where she also coordinated the Non-Major Strings Program.  She currently directs Midori’s Orchestra Residencies Program, where she coaches and performs as Midori’s duo partner, and will be on faculty this summer at the Interlochen Violin Institute, Juilliard Nord Anglia Summer Performing Arts Program, and Greenwood Junior Music Camp.

The mission of the New Britain Symphony Orchestra is to perpetuate the rich tradition of live symphonic music by presenting concerts of a high caliber performed by a professional orchestra, and to provide related education and enrichment activities, thereby contributing to the quality of life for people of all ages and ethnicities of Central Connecticut.